What explains the rise in Islamist rebel groups? How do Islamist insurgencies develop?

Islamist insurgent groups have been involved in a high proportion of civil wars in recent decades. Militant Islamism has become pervasive among Muslim armed groups in ways previously reserved for "Third-Worldist" and socialist inspired ideologies. This ideological shift remains poorly accounted for. Existing explanations tend to assume that Islamist armed groups inevitably appear under conditions of political turmoil in Muslim societies, failing to make sense of innumerable cases where such groups do not gain traction.

Mikael Hiberg Naghizadeh offers an alternative account of when and where Islamist groups emerge, and when they do not. Naghizadeh argues that the ideological posture of rebel groups is a function of the character of the pre-war institutions they are mobilized from, and that this has been overlooked in the literature. Accordingly, the pervasiveness of Islamist rebel groups should be studied in relation to the social capital of the population in question, understood networks and institutions defined by religion or by other idea-systems.

A basic premise is that at the macro-historical level, many Muslim societies are defined by "incomplete modernity". This refers to situations where processes of modernization have undermined traditional institutions, for example Sufi-brotherhoods or tribal councils of elders, but where those have not been replaced with effective state rule. This has paved the way for new forms of religious associations to emerge, replacing traditional authority, and paving the way for political mobilization along new religious lines.

In his presentation, Naghizadeh will draw on 11 case studies from various regions in Somalia, North Caucasus, and Pakistan, comparing regions in which Islamist rebel groups emerged to similar regions in which they did not. The case studies confirm a pattern by which Islamist groups emerged where the pre-war social landscape was defined by social fragmentation and weak institutions. In these regions, disruptive shocks have undermined the capacity of pre-existing institutions to be providing public goods such as security and welfare, opening up a space for Islamist actors to experiment with public-goods provision as well governance. In regions where there was greater continuity of traditional institutions, Islamist actors were either integrated into the political mainstream, or they were marginalized.

In the discussion, we will critically engage with the account that incomplete modernization prepares the ground for Islamist groups, look at its applicability to other cases, and examine its possible implications for policy-makers and practitioners.

The PRIO Middle East Centre hosts a series of breakfast seminars, catering to Oslo's diverse community of MidEast watchers. The series will draw attention to current issues, and discuss those in the light of historical, regional and global trends. The MidEast Breakfast provides an opportunity to combine breakfast with food for thought in a compact one-hour format.

The Origins of Islamist Civil Wars 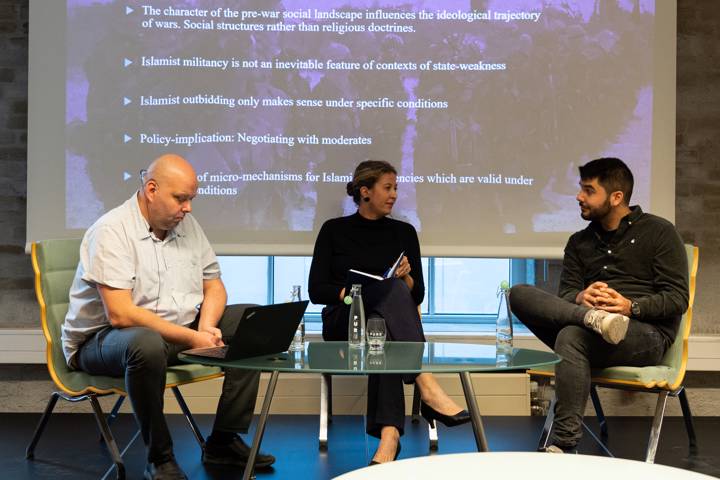