​Nadia Murad and Dr. Denis Mukwege have been awarded the Nobel Peace Prize for 2018, ‘for their efforts to end the use of sexual violence as a weapon of war and armed conflict’. Berit Reiss-Andersen, chairman of the Norwegian Nobel Committee, called the winners ‘the helper … [and] the witness’ in their common fight against sexual violence.
PRIO Director Henrik Urdal had placed Mukwege and Murad on his Nobel Peace Prize shortlist this year, and said it was well-deserved: ‘This is a prize to hold perpetrators of sexual violence in war accountable.’ Mukwege has been on the PRIO Director’s shortlists for the Peace Prize since 2010.
The prize functions on multiple symbolic levels by awarding their efforts to challenge and shape existing norms, internationally, nationally, and locally. Mukwege has criticized the Congolese government and demanded accountability, while Murad has worked as an activist including in her role as a UN Goodwill Envoy. Additionally, by focusing on Murad’s Yazidi background the prize also highlights the plight of ethnic and religious minorities in war.
The laureates are strongly in line with Alfred Nobel’s will, which emphasizes three different and equally important types of peace work, including “work for fraternity between nations”, “the abolition and reduction of standing armies”, and “the formation and spreading of peace congresses”.
In today’s context, the work by Denis Mukwege and Nadia Murad is instrumental in all of those areas. Mukwege’s exceptional effort in reducing the suffering of sexual violence and Murad’s advocacy has drawn the world’s attention to the use of sexual violence in conflict, and to the victims of such abuse. By highlighting this issue, they can be seen as contributing to the abolition and reduction of standing armies by working against a central strategy in conflicts.
Inger Skjelsbæk is a research professor at PRIO and a leading expert on sexual violence in armed conflict. She agreed this prize is significant: ‘This is a very important prize at this particular point in time because international institutions fighting impunity need support.’
PRIO researchers have extensively examined sexual violence in conflict. From 2014 to 2016 PRIO researchers also collaborated with Dr. Mukwege and the Panzi Hospital for a research project on female empowerment.
Group picture Mukwege visit.jpg 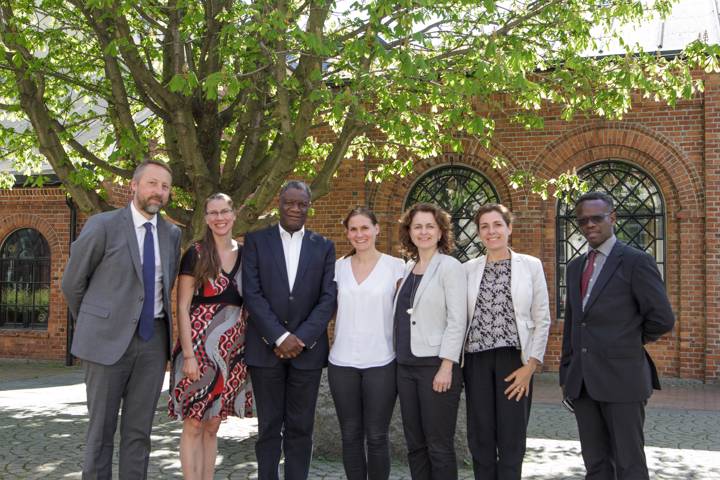