Dataset on urban ‘social disorder’ events occurring in capitals and other major cities of the developing world.

This dataset has been superseded by Urban Social Disorder v.3.

The Urban Social Disorder (USD) dataset v2.0 contains information on urban 'social disorder' events occurring in capitals and other major cities of the developing world for the 1960-2014 period. Version 2 of the dataset covers 103 major cities in 89 different countries, with near complete coverage of the largest cities in Sub-Saharan Africa, Central- and East Asia, the Middle East and North-Africa, and Latin America. Also included in the updated USD version 2.0, is a new dedicated coding software made available for users who wish to replicate the USD methodology to code their own cities (Windows only).

The dataset contains detailed information on the individual event, coded in an Excel spreadsheet and supplied with extracts from the Keesing's text files. The data are further organized into aggregated annual and monthly counts of violent and non-violent events per city, facilitating cross-sectional time-series analyses. An overview table for all the cities provides useful meta-data such as geographic coordinates and ID keys for conveniently linking with other city-specific datasets. 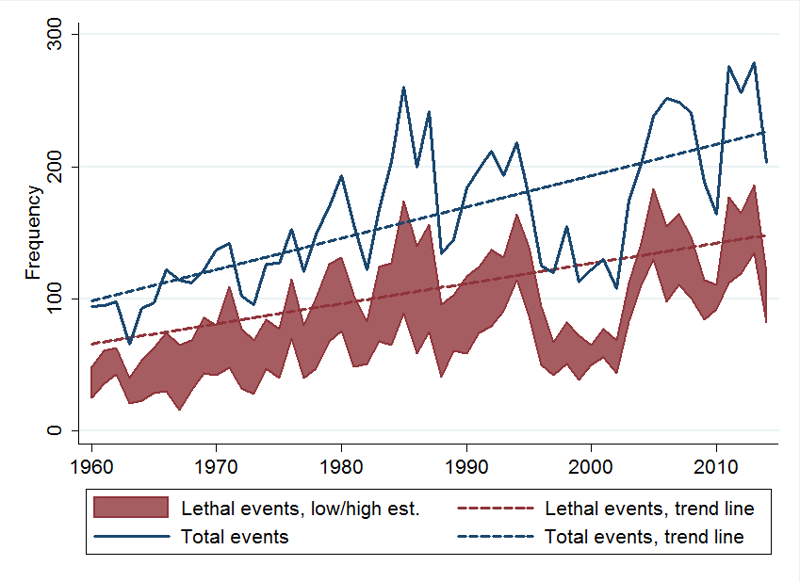 A total of 9,018 events have been recorded for these cities, of which 3,797 involved lethal casualties. The data are compiled from electronic news reports in the Keesing's Record of World Events and cover different forms of both violent and non-violent politically motivated disorder, including: