Inspirational Creative Practice: The Work of Artists after War and Violent Conflict (INSPIRE) 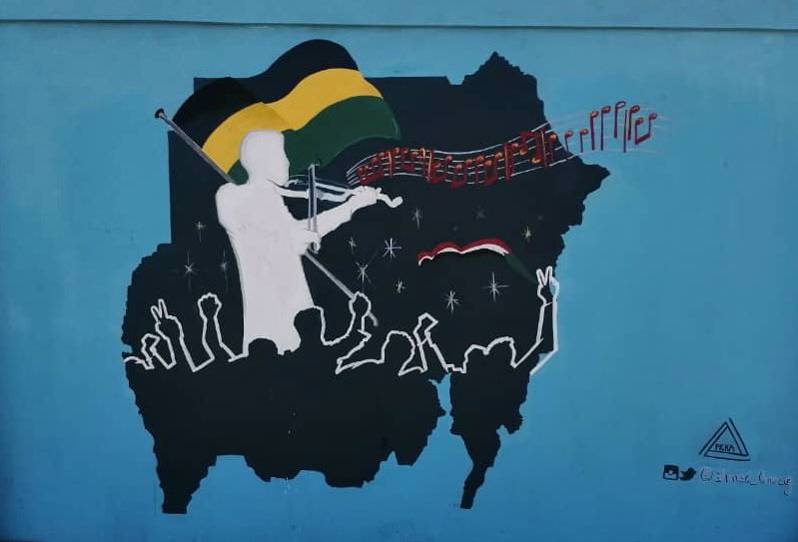 Inspirational Creative Practice: The Work of Artists after War and Violent Conflict (INSPIRE) studies the role of artists and creative practice in and after violent conflict, exploring both what inspires and motivates those engaged in creative practice as well as how artistic expressions inspire and move others into action for social justice. The project introduces inspiration as a new and important field of ethnographic research through studying the intersections between artists, art and activism during and after war. The project will focus on the role of local and transnational creative practices in and after wars in Sudan and Myanmar, and study artists and activists in exile in four European countries.

INSPIRE has received funding from the FRIPRO programme of the Research Council of Norway.

INSPIRE also has an advisory board consisting of artists, academics and cultural institutions to provide guidance on issues such as arts-based methods, finding appropriate artists and cultural spaces, and dissemination beyond academic outputs.

Conflict, war and displacement reconfigure societies in abrupt, dramatic, and contradictory ways (Grabska 2014, Lubkemann 2008, Vigh 2008). The speed and unpredictability of unfolding events during war, the experience of violence and the need to take risks in times of war creates protracted and radical uncertainty (Horst & Grabska 2015). Social hierarchies may be reversed or temporarily dissolved, continuity of tradition may become uncertain, and future outcomes once taken for granted may be thrown into doubt (Horvath et al. 2009). At the same time, in such an open situation, potential exists for creativity, innovation and societal transformation. Artists play a central role in periods of uncertainty and openness, both as commentators of events and as inspirators for change. INSPIRE introduces inspiration as a new and important field of ethnographic study and studies the ways in which artists, art and activism intersect during and after war.

INSPIRE draws on work on inspiration in the humanities and psychology, combined with insights from research on artists and activism in anthropology, sociology, political science and conflict studies. It will particularly focus on spatial and temporal dimensions of inspiration in times of war. By making a substantial empirical contribution to the study of artists, art and activism during and after war, INSPIRE will provide new insights into the interrelations between the individual creative and collective mobilising forms of inspiration.

INSPIRE will draw on multi-sited ethnography, (creative) life history interviews with artists, collaborative arts-based workshops, qualitative interviews and focus group discussions. A virtual platform will also be created for the project. The virtual platform will function as a space to show how we work with the project and to share research outcomes, as well as being used as a research tool and method in the project. By using exploratory approaches, involving arts-based workshops and the virtual platform we aim to explore ways of co-creating knowledge that draw on a combination of scientific and artistic methods. Our approach aims to bridge social sciences with humanities, while drawing on work at the boundaries of science and art. We believe that research that engages artists, art and audiences is needed to help the social sciences better comprehend human experiences – in particular those in times of war – in more holistic ways than is currently the case. The collaborative arts-based methods will allow us to bring to light the importance of situated and embodied ways of understanding the world.

INSPIRE will analyse 'inspiration' in local and transnational intersections between artists, art and activism in war and in post-war contexts. The project is guided by the following three research questions:

While the primary objective of INSPIRE is to develop a comprehensive theory of inspiration and thus contribute scientifically, the project is expected to have a strong societal impact as well. This potential lies in understanding the ways in which artists, through their art, move the intellect and emotions of others. During and after war, representations and narratives play a substantial role in shaping the basis for a post-war future. New knowledge on how these representations and narratives are shaped by artists, art and their audiences can help stakeholders working with reconciliation processes after war, especially those who use arts-based methods.

Dr Mahashe works in the field of photography, particularly at the intersection of artistic practice, archives and anthropology. His research takes khelobedu as a central idea, drawing on its capacity for complicating ways of knowing. His current project '––defunct context' investigates the creative potential in the gaps inherent in popular approaches to transforming institutions like ethnographic museums. This process has led to a prototype of a pavilion for hosting transdisciplinary exhibitions like the installation Camera Obscura #0. He regularly contributes to exhibitions and conferences. Website: www.esposureovertime.yolasite.com and www.georgemahashe.co.za

Anna Konik makes video installations and art films. Her practice combines video, photography, drawing, art objects and works in situ with a strong space context. Konik received a Ph.D. in Fine Arts at the Academy of Fine Arts, Warsaw and her work has been shown in numerous Polish and European museums. Her art works are in private and corporate art collections and her solo exhibitions include: In the Same City, under the Same Sky..., ZiF Bielefeld and National Museum of Contemporary Art (MNAC), Bucharest (2015/2016); Grain of Sand in the Pupil of the Eye. Video works 2000-2015, Centre for Contemporary Art, Ujazdowski Castle, Warsaw (2015/2016). Selected group exhibitions include: Three Plagues Labirynt Gallery, Lublin (2019), The Wall. Art Face To Face With Borders, TRAFO, Szczecin (2017); Invisible Barriers: Moving Images, The Golden Thread Gallery, Belfast (2015); Progress and Hygiene, Zacheta National Gallery, Warsaw (2014/2015). Konik also has extensive teaching experience including at the International Summer Academy in Salzburg, the Humboldt University in Berlin, the Faculty of Fine Arts in Warsaw, the University of Art in Poznan, Poland, and the Dresden Academy of Fine Art, to mention a few. Konik is based in Warsaw, Poland. Website: https://www.annakonik.art.pl/

Martin Bach is currently the Director of the Goethe-Institut Norway in Oslo. He was the Regional Program Director for South America at Goethe-Institut São Paulo, Brazil from 2015 -2017 and Project Director at the Allianz Cultural Foundation from 2008-2014 in Munich and Berlin. Bach was Project Manager for the German Foreign Office in the Department for Culture and Education in Berlin from 2003-2007. Martin Bach has studied Political Science in Berlin and Kyoto. He is appointed to become director of the Goethe-Institut Netherlands as of June 2020. Website: https://www.goethe.de/ins/no/no/index.html

Solveig Korum is a doctoral researcher at the University of Agder, Faculty of Fine Arts, and Senior Advisor in Kulturtanken – Arts for Young Audiences Norway. Solveig holds a MA degree in Asian and African studies from the University of Oslo and Dakar, majoring in History. She has been employed at the International Department of Kulturtanken (formerly Rikskonsertene, Concerts Norway) since 2008, where she has been in charge of musical development projects in India, Nepal, Sri Lanka and Bangladesh. Solveig contributed to the planning and programming of the Norwegian Ministry of Foreign Affairs' annual seminar for cultural cooperation with the Global South at Voksenåsen between 2009 and 2016. Besides this, Solveig is the co-founder of NaCuHeal Senegal, a non-governmental organization that operates tree-planting programs in Senegal, West Africa. She has lived abroad for several periods, with longer stays in France, Mali and Senegal. Website: https://www.uia.no/en/kk/profil/solvem16 and https://www.kulturtanken.org/

Anaïs Lellouche is a curator and art consultant based in London. She has curated exhibitions and commissions in London, Paris, New York, Dubai and Melbourne. As a result, she built a nuanced expertise in contemporary art from Europe, the United States, the Middle-East and the Asia Pacific. Anaïs is an agent for a select group of artists, developing opportunities for them through museum projects around the world. She also advises and curates private collections and foundations. Her curatorial expertise was forged working in leading museums, such as the Centre Pompidou, Metz and her art-market acumen was developed leading the pre-eminent Anna Schwartz Gallery, Melbourne. She has curated shows and commissions by some the most visionary artists working today, from global pioneers such as Daniel Buren and Sol LeWitt, to vanguard artists Oliver Beer, Marguerite Humeau, Chiharu Shiota and many more. Anaïs Lellouche is on the advisory board of La Pause Residency (Marrakech) and INSPIRE, Peace Research Institute (Oslo). She holds an MA from Bard College, Centre for Curatorial Studies (NY). She regularly publishes and teaches masterclasses on contemporary art. Website: https://www.anaislellouche.com/

​On 15 August, PRIO, PRAKSIS and artist Motaz Habbash will kick off a month-long residency with ten artists whose creative practices respond to lived experiences of conflict and oppression.

Please be invited and save the dates for the INSPIRE seminar series autumn 2021! The seminars will take place monthly, on Wednesdays from 12:00-13:00 CET, online, with invited researchers and artists.

Artists living in Norway and working on themes related to violent conflict and exile are hereby invited to take part in a unique series of online workshops in March-April 2021 to Explore Inspiration. Deadline for applications is March 1.

​​On September 15th the INSPIRE advisory board and INSPIRE researchers had their first meeting. Due to corona virus restrictions the meeting was held online.

​Congratulations to Sara Christophersen for completing her MA thesis titled Embodied possibilities: A study of dance as an artistic, everyday practice in Palestine. The thesis has been part of INSPIRE and TRANSFORM research projects.

Katarzyna Grabska (2022)
In Whose Voice? And for Whom? Collaborative Filming and Narratives of Forced Migration

Katarzyna Grabska & Roy Huijsmans (2022)
Dance as Liberating and as Limiting, as Connecting, Creating and Crossing Boundaries: Interview with Prumsodun Ok

Sara Christophersen (2020)
Embodied possibilities: A study of dance as an artistic, everyday practice in Palestine

In Whose Voice? And for Whom? Collaborative Filming and Narratives of Forced Migration

Embodied Agency: Creating Room for Maneuver through Dance in Palestine

“Kandakas and Meheiras”: The Emergence of Creative Citizenship and Belonging Through Women’s Music in Sudan

Introduction: Transgressing and Reworking Social Boundaries Through Dance and Music

Dance as Liberating and as Limiting, as Connecting, Creating and Crossing Boundaries: Interview with Prumsodun Ok

INSPIRE Seminar Series: The Use of an Art-Based Approach in the Exploration of Trauma and Resilience

INSPIRE Seminar Series: Research and Creation in Sites of Ethical Demand - Models of Conduct and Practice

Call for artists to participate in workshops to explore inspiration

Successful First Advisory Board Meeting for the INSPIRE Project

Sara Christophersen Hired as Research Assistant on the INSPIRE Project

Trude Stapnes Hired as a Doctoral Researcher on the INSPIRE Project

Embodied possibilities: A study of dance as an artistic, everyday practice in Palestine

Funding Secured for Project on Artists in Times of War